AIR-INDIA and the erstwhile INDIAN have been amalgamated into The National Aviation Company of India Ltd. (NACIL).

Air India has been India’s national flag carrier. Although air transport was born in India on February 18, 1911 when Henri Piquet, flying a Humber bi-plane, carried mail from Allahabad to Naini Junction, some six miles away, the scheduled services in India, in the real sense, began on October 15, 1932. It was on this day that J.R.D. Tata, the father of Civil Aviation in India and founder of Air India, took off from Drigh Road Airport, Karachi, in a tiny, light single-engined de Havilland Puss Moth on his flight to Mumbai (then known as Bombay) via Ahmedabad.

He landed with his precious load of mail on a grass strip at Juhu. At Mumbai, Neville Vincent, a former RAF pilot who had come to India from Britain three years earlier on a barn-storming tour, during which he had surveyed a number of possible air routes, took over from J.R.D.Tata and flew the Puss Moth to Chennai (then Madras) via Bellary.

Indian came into being with the enactment of the Air Corporations Act 1953 and was entrusted with the responsibility of providing air transportation within the country as well as to the neighbouring countries. Indian Airlines was given the task to assimilate various dimensions of the eight private airlines, which were nationalized to provide well coordinated, adequate, safe, efficient and economical air services. The airlines began its operation on 1st August, 1953. At the time of nationalization, Indian Airlines inherited a fleet of 99 aircraft consisting of various types of aircraft which were gradually replaced by Viscount, F27 and HS748. Nineteen hundred and sixty four(1964) was the beginning of the jet era in Indian Airlines when the Caravelle aircraft was inducted into the fleet. Between 1970 and 1982 Indian Airlines started inducting first batch of wide bodied Airbus A320 aircraft (19 aircraft) in June, 1989. Latest acquisition in IAL’s fleet, the Airbus A319, was inducted in December, 2005. Indian, together with its fully owned subsidiary Alliance Air, has a fleet of 70 aircraft (3 wide bodied airbus A300s, 47 fly-by-wire airbus A320s, 3 Airbus A319s, 11 Boeing 737s, 2 Dornier Do-228 aircraft and 4 ATR-42. IA has already placed order for 43 new aircraft ( i.e. 19 A319s, 4 A320s & 21 A321s )The Airlines’ network spans from Kuwait in the west to Singapore in the East and covers 76 destinations – 58 within India and 18 abroad. The Indian Airlines international network covers Kuwait, Oman, UAE, Qatar and Bahrain in West Asia; Thailand, Singapore, Malaysia and Mayanmar in South East Asia and Pakistan, Afghanistan, Nepal, Bangladesh, Sri Lanka and Maldives in the South Asia sub-continent. Indian is presently fully owned by the Government of India and has a total staff strength of around 19300 employees including that of Alliance Air.

Jet Airways was set up with the objective of providing high quality and reliable air travel in India. ”We don’t fly aircraft, we fly people’ is the motto of this private owned airline. They have chosen the yellow rose as their motif as it symbolizes friendship, warmth and caring. Since a very high percentage of the Indian domestic air traffic comprised of business travelers, their focus from the very beginning was to emerge as the “Businessman’s Preferred Airline”. This led to a product and service design that aimed at world class norms in professional service and efficiency, beginning with the choice of aircraft itself.

Jet Airways currently operates a fleet of 76 aircraft, which includes 8 Boeing 777-300 ER aircraft, 7 Airbus A330-200 aircraft, 52 classic and next generation Boeing 737-400/700/800/900 aircraft and 9 modern ATR 72-500 turboprop aircraft. The average age of the fleet is 4.37 years making it the operator of the youngest aircraft fleet in Asia. Jet Airways operates over 365 flights daily to 57 destinations that span the length and breadth of India and beyond, including New York (JFK), New York (Newark), Toronto, Brussels, London Heathrow, Singapore, Kuala Lumpur, Colombo, Dhaka, Bangkok, Bahrain, Kuwait and Kathmandu.

JetLite a wholly owned subsidiary of Jet Airways India Ltd, was acquired by Jet Airways in April 2007. Positioned as a Value based Airline, JetLite promises to offer value for money fares, in-flight meals at no extra cost, in-flight shopping and much more. Over 300 connections every day Operating 141 flights connecting 32 cities (2 international)

It is the first airline in India to receive the World Travel Market Global Award, the world’s premier global travel event in London. It has also won the H&FS Domestic Airline of the Year Award four times, with the latest award in 2001. And Citibank Diners Club has chosen it as India’s best domestic airline for our excellence in service.

SpiceJet is a low-cost airline based in New Delhi, India. It began service in May 2005. It was voted as the best low-cost airline in South Asia and Central Asia region by Skytrax in 2007. Their marketing theme “offering low ‘everyday spicy fares’ and great guest services to price conscious travelers”. Their aim is to compete with the Indian Railways passengers travelling in AC coaches.

With India’s economic and business growth, the percentage of travelling population is burgeoning. More and more Indians are travelling for both business and pleasure and everyone needs to save both time and money. SpiceJet’s vision is to answer that need, to ensure that flying is no longer only for CEOs and business travelers, but for everyone. With contemporary interiors, modern graphics and vibrant colours, SpiceJet is very much like today’s traveller – practical yet stylish.

SpiceJet has chosen a single aircraft type fleet which allows for greater efficiency in maintenance, and supports the low-cost structure. And when it came to selecting this single aircraft fleet SpiceJet has opted for new generation Boeing 737-800s. These 189 seater aircraft will allow for safe, comfortable and efficient flying and are ideally suited for short to medium haul flights in Indian conditions.

AIR DECCAN is a unit of Deccan Aviation Private Limited, India’s largest private heli-charter company. Formed in 1995, Deccan Aviation Private Limited has carved a niche for itself in the Indian aviation scene with its reputation for providing speedy and reliable heli-services for company charters, tourism, medical evacuation, off-shore logistics and a host of other services.

The company has a modern fleet of ATR-42-320 aircraft, one of the finest and most efficient Turbo-Prop aircraft flying. ATR is a European joint venture between Alenia Aeronautica and EADS. The ATR 42 has become a reference aircraft amongst airlines around the world, by offering a safe, easy to maintain and comfortable aircraft operating on the regional market with the best economics on short haul sectors. To date, ATR has sold over 650 aircraft to more than 100 operators in 73 countries all around the world.

The company has adopted a ‘lean-and-mean’ approach to staffing and aims at maintaining a low aircraft-to-employee ratio. They have some of the most experienced administrators, aircrew and engineers on their rolls. A good work culture coupled with a skilled workforce is the backbone of the company.

IndiGo is built for people with things to do, places to be, people to see – who don’t want to waste time, money or energy in the process. By minimizing the cost/time/tension of air travel, IndiGo opens up a country full of opportunities. IndiGo incorporates the best hardware, software, interface design & personnel from around the world. The IndiGo team uses all of these resources to design processes and rules that are safe and simple, that make sense, and that cut waste and hassles, which in turn ensures a uniquely smooth, seamless, precise, gimmick-free customer experience at fares that are always affordable. IndiGo focuses on doing one thing, and doing it well. That’s why they have one type of airplane – brand new Airbus A320-200s, seating 180 passengers serving destinations within India. As of April, 2008 they have 18 aircraft serving 17 cities within India with 120 daily flights.

Go Airlines (India) Pvt Ltd is the aviation foray of the Wadia Group, The airline operates its services under the brand GoAir.  GoAir launched its operations in November  2005. GoAir, a low-fare carrier launched with the objective of commoditising air travel, offers airline seats at marginal premium to train fares across India. The airline currently operates across 11 destinations through 561 weekly flights.

The GoAir route network spans prominent business metropolis as well as key leisure destinations across the Indian subcontinent. GoAir is currently servicing the airports at Ahmedabad, Bangalore, Chennai, Cochin, Delhi, Goa, Hyderabad, Jaipur, Jammu, Mumbai and Srinagar. Through this route network GoAir ensures a smart value-for-money option for both business and leisure travellers, without compromising on either safety or service factors.

GoAir’s distribution network has been well-researched and after thorough evaluation of the available mediums, the Airline has introduced a gamut of options designed to make tickets very accessible to the end customer. GoAir has convenient online booking options of on its web site wherein the passenger or his associate can book GoAir tickets 24×7, 365 days a year from the comforts of his home. For passengers who do not have a credit or debit card or access to a Web Networked Computer, tickets can be booked from other distribution mediums including GoTravel Agents or GoCallCentre. In addition, customers can directly buy against cash from their residence against home delivery of the tickets. Tickets are also available at the Airport Counters.

GoAir is positioned as ‘the Smart People’s Airline’. It’s captivating theme, ‘Fly Smart’ is aimed at offering passengers a consistent, quality-assured and time-efficient service through ‘pocket-friendly’ fares. The airline uses the state-of-the-art Airbus A320 aircraft fleet.

Since January 2007, GoAir has been consistently recording Highest Load factors in the industry. It has been recording an average load factor of 86% achieved through a balanced mix of good on-time performance and consistent quality of customer service coupled with smart fares.  As part of its aggressive future outlook, GoAir plans to increase its fleet size to 18  by March 2009 and 34 to March 2011 to induct new routes while efficiently servicing existing ones. 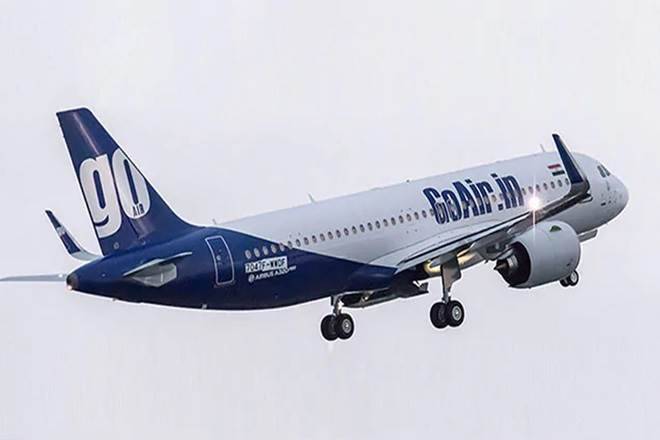