Term X-ray is actually referring to the radiation that is used to make the image on the film. The radiograph or picture on the film is the resultant picture that we see. A radiograph is an extremely important diagnostic tool. These pictures show the dental professional many things that are not visible by just looking in the mouth. Therefore, radiographs are an essential part of a thorough and complete examination. In order to do a proper checkup, it is important that radiographs are used to help with the visual exam. Without the proper use of both, an inferior examination and inferior treatment will result.

Radiographic or X-ray examinations show the dental professional things that are not visible to the naked eye. They provide your dentist with an important tool that shows the condition of your teeth, its roots, jaw placement and the overall composition of your facial bones.

Not everyone needs to have radiographs taken every year. Only your dentist can say how often you need them. It is recommended that your dentist prescribe the appropriate type, number and frequency of x-rays based on your needs. Not everyone needs a cleaning and check-up every six months; as well, not every patient needs radiographs every year. However, some patients may need to have radiographs taken more often. For example, an adult who has had no problems at their last few dental check-ups, and who maintains good oral hygiene at home, may not need check-up x-rays every year.Your radiographic schedule is based on the dentist’s assessment of your individual needs, including whether you’re a new patient or a follow-up patient, adult or child. In most cases, new patients require a full set of mouth X-rays to evaluate oral health status, including any underlying signs of gum disease and for future comparison. Follow-up patients may require X- rays to monitor their gum condition or their chance of tooth decay.

( 1 ) PERIAPICAL  X-ray shows the entire tooth, including the root and surrounding bone and is useful in diagnosing an abscess, impacted tooth or bone loss due to periodontal disease. On each radiograph, the teeth from either the upper or lower jaw in one portion of the mouth are shown.

( 2 ) BITEWING  X-rays highlight the crowns of the teeth. On each radiograph, the upper and lower teeth in one portion of the mouth are shown, from the crown to about the level of the jaw. These require patients to hold or bite down on a piece of plastic with X-ray film in the center. Bitewing X-rays typically determine the presence of decay in between teeth, while periapical X-rays show root structure, bone levels, cysts and abscesses. They are also used to help diagnose cavities between the teeth, as these areas are not visible when looking directly in the mouth.

Periodically, a dentist may recommend a “full-mouth radiographic survey,” or FMX. This means that every tooth, from crown to root to supporting structures, will be X-rayed using both bitewing and periapical radiographs.(See photo below). An FMX may be made if you are visiting a new dentist for the first time, or if no recent radiographs are available and the patient’s overall dental health needs to be assessed.

( 3 ) OCCLUSAL  X-rays are larger and highlight tooth development and placement. On each radiograph, nearly the full arch of teeth in either the upper or lower jaw is shown. These X-rays are taken with the X-ray machine either pointing straight down from near the nose (to take pictures of the upper jaw and teeth), or straight up from under the chin (to take pictures of the lower jaw and teeth).

Extraoral X-rays are made with the film outside the mouth. These can be considered the “big picture” X-rays. They show teeth, but their main focus is on the jaw or skull. Extraoral radiographs are used for monitoring growth and development, looking at the status of impacted teeth, examining the relationships between teeth and jaws and examining the temporomandibular joint or other bones of the face. Extraoral X-rays are less detailed than intraoral X-rays, so they are not used for detecting caries or flaws in individual teeth.

( 1 ) PANORAMIC RADIOGRAPHS (OPG)  show the entire mouth area — all teeth on both upper and lower jaws — on a single X-ray. This type of X-ray requires a special panoramic X-ray machine. What happens is that the tube head that emits the X-rays circles behind the patient’s head, while the film simultaneously circles across the front. That way, the full, broad view of the jaws is captured on one film. Because the machine moves in a set path, the patient has to be positioned very carefully. And, because the beam and the film are both moving, any movement from the patient will blur the image on the screen. That’s why such care is taken to keep the patient’s head absolutely still in exactly the right position. The machines may have chin rests, forehead rests, and side head positioners, plus bite-blocks that patients will be asked to close their teeth around. All this may look and feel intimidating, but the process is very safe and often uses less radiation than intraoral radiographs. They are a good screening tool and used extensively for pre-orthodontic assessment of bone, to visualize impacted wisdom teeth (It is difficult to take an intraoral X-ray of this area) as well as in pre-implant surgery bone height assessment. They show any abnormal growths or cysts in the jaw bone.

2 ) TOMOGRAMS  are a special type of radiograph in which the dentist can focus in on one particular layer, or slice, of anatomy while blurring out all other layers. This allows dentists to see structures that may be difficult to see with standard X-rays. For example, the temporomandibular joint can be difficult to see. The condyle that makes up part of the joint is in the middle of a dense cranial base, so it is extremely difficult to X-ray. But by using a tomography technique called a temporomandibular joint projection, a straight “slice” that’s lined up with the condyle shows that area more clearly.

( 3 ) CEPHALOMETRIC   projections are X-rays taken of the entire side of the head. They are used to look at the teeth in relation to the jaw and the profile of the individual. Orthodontists use cephalometric projections to plan their treatments. They will look at the entire face to determine the best way to get the teeth aligned in the right way for that particular person, according to the size of their teeth and jaws. 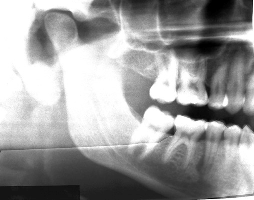 ( 4 ) LATERAL-OBLIQUE:  To get a good view of the Temporo mandibular joint, a special kind of extra-oral Xray called the Lateral Oblique Xray might be required.This is generally not done at the dental clinic but with the radiologist on the dentist’s recommendation.

( 5 ) COMPUTED TOMOGRAPHY  or CT scanning, usually is performed in a hospital, not the dentist’s office, although a dentist may refer a patient for this test. With this process, the patient lies still in the CT machine while the X-ray beam rotates around. From the X-ray information, a computer creates a three-dimensional image of the interior structures. It is used to identify problems in the bones of the face, such as tumors or fractures.

SIALOGRAPHY  is a way of visualizing the salivary glands on a radiograph. Soft tissues, like gums and salivary glands, can’t usually be seen on an X-ray because they are not dense enough to absorb enough X-rays to appear clearly on film. With sialography, the dentist injects a radiopaque contrast material directly into the salivary glands. This material shows up easily on film, allowing dentists to diagnose salivary gland problems, such as blockages or Sjögren’s disease.

The benefits of X-rays are well known: They help dentists diagnose relatively common disorders such as cavities, periodontal disease and infections. Without this ability to see inside a tooth and beneath the gums, more disease would go unchecked, patients would experience more pain and discomfort and more teeth would be lost because proper treatment couldn’t be started in time.

The X-rays used in dental and medical offices emit extremely small doses of radiation. However, cells can be damaged by many small doses that add up over time. That’s why experts recommend that X-rays be used with precautions and only when necessary.

Several changes made by dentists or required by regulatory agencies have reduced radiation exposure in dental X-rays through the years:

Lower X-ray dose — The single most important way dentists keep their patients safe from radiation is by limiting the X-ray beam to a small area and by reducing the amount of radiation that strays from that path. Although an X-ray machine looks quite large, the X-rays come out of a small cone that limits them to an area less than three inches in diameter. X-ray machines are well shielded and there is very little radiation exposure beyond the diameter of the beam.

Better film — The speed of films used for dental X-rays has been improved so less exposure is needed to get the same results.

Digital radiography — The use of digital X-rays reduces radiation by as much as 80%.

Film holders — Dental patients used to hold X-ray film in their mouths with their fingers. Those days are long gone. Now, holders keep the film in place.

Limited use of X-rays — Dentists take radiographs only when they believe they are necessary for an accurate dental assessment or diagnosis.

Current guidelines recommend that X-rays be given only when needed to diagnose a suspected problem..

All health care providers are sensitive to patients’ concerns about exposure to radiation. Your dentist has been trained to prescribe radiographs when they are appropriate and to tailor radiographic schedules to each patient’s individual needs. By using state-of-the-art technology and by staying knowledgeable about recent advances, your dentist knows which techniques, procedures and X-ray films can minimize your exposure to radiation.

The ionizing radiation that you receive from one dental x-ray is substantially less that the radiation you receive every day from the sun and stars. Advances in technology have made dental x-rays safer. Doses of radiation are kept at the lowest practical value to minimize patient exposure. This is done with the use of a long cone position-indicating device, appropriate settings on the machine and using newer, high-speed film. Many times a radiograph is necessary to diagnose certain conditions; and therefore, the benefit outweighs the risk . It has been proven that x-rays have a minimal risk on a pregnant woman and her unborn baby. However, radiographs for pregnant women are only taken in an emergency situation.

DIGITAL x-rays are one of the newest X-ray techniques around. With digital radiographs, film is replaced with a flat electronic pad or sensor. The X-rays hit the pad the same way they hit the film. But instead of developing the film in a dark room, the image is electronically sent directly to a computer where the image appears on the screen. The image can then be stored on the computer or printed out. One of the great advantages of this process is that radiographs can be digitally compared to previous radiographs in a process called subtraction radiography. The computer can digitally compare the two images, subtract out everything that is the same and give a clear image of anything that is different. This means that tiny changes that may not be noticeable with the naked eye can be caught earlier and more clearly with digital-subtraction radiography. Subtraction radiography requires a specialized projection technique and additional software. At Dr. Khosla’s Dental Centre we have been using digital x-rays (SUNI RVG) for several years.

Eliminate film processing delays.
Reduce patient and operator exposure to radiation by 80%.
Patient education through explanation of images on the screen. 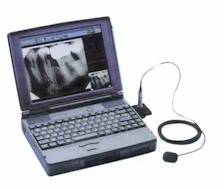 You can automatically calculate the distance from the end of the file to the apex and this allows for measurement of the root canal lengths.
Images can be enlarged on the computer screen and specific findings and procedures can be better illustrated and discussed with patients before and after the treatment.