The N.T.I. Tension Suppression System is a prefabricated poly carbonate matrix that a dentist fit to you. It is completely different from any other type of mouthpiece. The NTI is a small, nearly invisible plastic device that you wear over your front teeth while you sleep. In one short visit we can custom make the NTI oral appliance for you. Wearing the NTI reduces clenching intensity by 66%. In a few days or weeks, morning headache pain, neck pain, sore jaws, and other related pain associated with involuntary intense clenching usually begin to disappear.

The delivery sequence of an NTI-tss. (The big white things in the lower corners of the middle photos are a dentist’s gloved fingers!)

How does it help?

By reducing clenching intensity and preventing grinding the NTI relieves or resolves:

Has this treatment been tested?

Can an NTI really help me feel better?

How Does It Work? 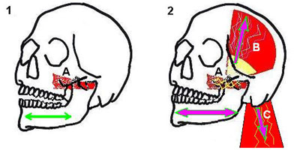 When there is temporalis contraction exclusively (no lateral activity), the jaw joint and sinuses are less strained, while resultant temporalis pain may be considerable. Tension-type headache patients without jaw disorders clench their jaws 14 times more intensely while sleeping than do asymptomatic controls.

A traditional dental mouthpiece, or splint, reduces the resistance to side-to-side movement, thereby reducing the effort and resultant strain to the jaw joint and sinuses. The same splint also provides an ideal clenching surface. The temporalis can be felt contracting (it will bulge slightly) when clenching with or without a splint.

Application and General Protocol for the NTI-tss

The NTI-tss is indicated in those diagnosed conditions whose treatment (or prevention of) warrants/requires any combination of:

Prevention of above conditions is accomplished by preventing the occlud-ING of the canine and posterior teeth during parafunctional events.  There is only one way in which an individual can generate adverse joint strain (which perpetuates an internal derangement) or maintain a less-than-optimal condylar orientation, or to perpetuate muscular dysfunction, and that is to achieve certain degrees of muscular tension.  This tension is made possible by the occluding of the canine or posterior teeth.  Certainly, if one were to maintain “rest position” (lips together, teeth apart), there would be none of the conditions cited above.

Only the lateral pteygoid has a direct effect on the TMJ.  In order to create a strain, the LP must encounter resistance to its contraction.  Resistance is provided by the occluded teeth (posterior or canine).  The degree of strain generated is a function of which teeth are being occluded and the intensity of the LP’s contraction.   The more distal the contra-lateral contact is, the more strain the LP can exert on the ipsilateral joint.
The degree of resistance the LP encounters is a function of the intensity of temporalis jaw elevation, which is occluding the teeth in the first place.  Without posterior or canine occluding (that is, incisal contacts, only), elevating (occluding) forces are only 1/3 of maximum.

And may encourage a clenching response. Vertical opening must be kept to a minimum, without allowing for canine or posterior occluding

In some instances, it may be necessary to reduce a palatal or distal-buccal cusp to comply

Our thanks to James P. Boyd, DDS for developing the NTI