Dentists have a unique opportunity to detect domestic violence 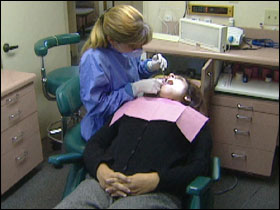 Those planning a trip to the dentist’s office might be up for more than just a tooth exam. In a survey, dentists indicated they would like to play a larger role in detecting and stopping domestic violence.

A recent survey by the UCSF School of Dentistry show that many dentists currently don’t screen for, or even report, signs of domestic abuse, but more than half the dentists surveyed said they would like more training in this area. An educational program to teach dentist how to approach this sensitive subject may be on its way.

The researchers conducted a national random survey of 321 dentists. In the study, the dentists were asked about their attitudes and practice behaviors related to domestic violence.

A dentist screening for domestic violence might have helped Karen Albares who, for 8 years, was a victim of physical, verbal and emotional abuse. More than once she tried to escape, but her husband made it impossible to leave. “I tried to get away from the very beginning…[but]…it wasn’t until Mothers Day of ’96 that we finally were able to have him arrested,” she says.

Albares’ story is not unique.The American Medical Association estimates that American women face a 20 to 30 percent lifetime chance of battery. Domestic violence is the most common form of serious injury in women and happens to all ages, races, religions, income, educational level and sexual orientation. It even accounts for more than 50 percent of female homicides.

Research has also shown that most domestic violence victims receive head and neck injuries, trauma which a dentist could easily spot.

The problem is, patients often don’t confide in dentists, and dentists rarely ask. “In my case, had a dentist had the foresight to ask me questions, it was not only me that he would be helping, but my three children too,” Karen says.

The UCSF researchers found several reasons dentists are reluctant to screen for domestic abuse. One is the presence of family members during the visit. Other reasons are lack of training in dealing with the issue, concerns about offending the patient, and the dentist’s own embarrassment when talking to the patient.

Cathleen Silliman, D.D.S agrees that it can be slightly awkward, but believes dentists should intervene in any way possible. “I always ask, ‘How did you do that? What happened here?’ I think it’s very important that we get to the source of what happened and I think that it is something that needs to be handled very delicately,” she says.

Gerbert, who is a UCSF professor and chair of the division of behavioral sciences in the School of Dentistry, suggests a model in which dentists ask patients about abuse, give validating messages which acknowledge that battering is wrong and which confirm the patient’s worth, document signs, symptoms and disclosures in writing and with photographs; and refer victims to domestic specialists in the community.

Albares is encouraged by the idea of intervention by dentists: “We are victims until we get help.”

Says Dr. Silliman, “The more questions that we ask, the more information we’ll find out, and the more helpful we can be in intervention.”

IDENTIFYING VICTIMS AND HELPING THEM

Another barrier to intervention is the patient’s evasiveness and failure to disclose information. Research on physicians’ responses to battered women show that many victims are reluctant to admit abuse due to denial, concern over confidentiality, shame, humiliation, and fear of partner retaliation.

“Well-meaning people would tell me just to leave him,” recounts Albares. “But no one would be with us if we left. No one would be with us at night to protect us, or during the day where we work [or at] my children’s school. We were terrified of him and his friends… We had a lot of fear and it was just easier to stay,” she says.

Albares believes people need to get involved. “We have to have places to go and people to help us. It’s definitively not something we can do on our own. We need outside help,” she says. Her advice to other women is to find hotline numbers, and other resources in the area.

Today Albares is happily remarried and is slowly reclaiming her life, but says the effects of the abuse are long lasting. “They’re not fixed in a day and they take lots and lots of work and lots of help from people that care,” she says.

Albares tries to volunteer her time in different clinics in her area in order to help women and children in situations similar to her own. “I just want women that are in abusive situations to know that there is hope. [Today] I have a good life, I’m re-married and I’m very, very happy” she says.